After I reported to you a little about lenses and equipment, there are now ten small photography tips (which are also combined contends Blog Tips partially). Have fun while reading! 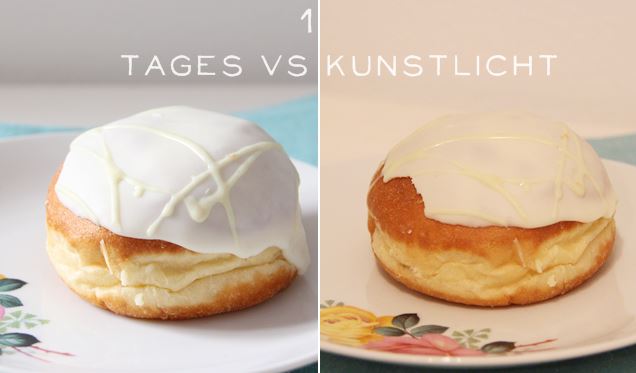 Photographed in Daylight: I earlier made the mistake many times and have made the photos at night, which was because that I opened the blog in the fall and the day and sunshine hours were shorter. In daylight you have the possibility that the colors look unadulterated -in Tungsten they are often yellow, have strange long shadows – the friendliness is lost. But it is also true again that you can take good pictures even in artificial light (which can also consist of candlelight) – try it out! Here the imagination and the joy of discovery are no limits, playing with the light, the shadows, contrasts and contours.
A tip here is to specifically look at the Post planning because many of your images that want to use it, will be perhaps daily and depends on the weather!
One can also interact with various tricks against this damned yellow tinge: White space, daylight lamps, a good camera angle, reflectors, etc – remains the best for me but daylight> and not in direct sunlight.

Photographed if possible not directly in the sunlight, but to have the sun in the back – against all advice, that this is not his way, often produces good and intimate photos (when the right light)! I make almost all my pictures, they do not take pictures in direct sunlight. The light creates harsh shadows, especially when photographing people. It erases partially the contours of the face, but also paints contrasts to where they do not belong. A slight cloud cover in between helping the situation to make it more real and more beautiful “soft”. The Magic-hours, then call two hours a day, then pass just before the sun rises (ie very early in the morning) and at the hour just before it sets, so over the horizon / the mountain crest / the skyscrapers / etc. has pushed.

The minutes before you can perfectly use it to take pictures against the light. Many say that it would not do, otherwise all black and full of shadows is – but a few settings in the brightness range of the camera and you can already play with gold shining hair and the most beautiful light for photos!

Taken without flash, so products, people, food photos – except going away or softbox. I use really rarely, if ever my flash. Especially since I do not have a flash attachment, but only the standard flash and no Softboxausrüstung that invalidates the flash and not be so appear “tough”. For those who have no particular additional equipment, I would say that it omits the flash for now. When going away, however like I take it, then edit the photos but strongly after.

Edited your photos to something: see the pictures on the camera often sharp and intense color from. If you play them on your PC, you might be disappointed, the reason is that the photos on the small camera screen are much more compressed. With simple steps, photos can lighten or nachkontrastieren – these are often two steps, which do not take much time but rausholen much out of your photos.

Give your photos your own style: the style can thus prove what you knippst and how their knippst she already – but pictures often get only by a (sometimes intense) post your distinctive style. So I currently like that my photos look a little older, the colors slightly faded, but also strong and bright Whether I handled this way forever, I do not -. But currently I like it the way it is. By editing you also have more sensitivity, which would require your photo from scratch more. Is it always wrong? Always too bright? These are settings that can change her directly when taking pictures.

This point I personally VERY important !!!!!

Pay attention to the photo sizes and quality in the blog: 450-750 pixels around, depending on layout. I find that in order to let the photos on sufficiently blog. Then there is the quality added – I always invite via Picasa, which does not compress the photos below 800 pixels, but shows the original size, so far as one that clicks in the postal sector (Blogger click on the image and click original size) – but many tend prefer to external servers like flickr or photobucket to use. Also, I would advise you to never edit the original, but to make a copy and to store them as such, who knows when you need the original again, because often it is dissatisfied with edits in retrospect.

Pay attention not only to the designs themselves, but also on the background: This is especially true for products or food photos and instructions images where the background would distract. Try your surroundings “clean” to keep and advances also like things several times back and forth, schwänzelt around the subject and looking for you the right perspective. You can pick your background lack of nice options also tinker yourself by biases as wallpaper residue on thick cardboard or fabric remnants ironed smooth and utilized as a base.

Also at Outfit Photos I think it’s always good if the background is not too confusing, so the focus remains on substantially, especially with outfit pictures, I still think it’s nice when they are photographed outdoors, plus there is the fourth part of the series a Post.

Photographed not a design from the same perspective ten times, but tries to find different and also make photos for: Always Food obliquely from above to photograph perhaps is a good way to get a nice photo. But why not even frontally or bird’s? More moved to the left? More to the right? We live in the digital age, a snapshot can be deleted quickly. When I do food photos, I photograph average food 15-30 times. Depending on how much is revealed. In DIY tutorials ranging 2-3 images per step, the best will be selected on your PC. Stay tuned for details! I want to see no outfit as a whole body image fifteen times in a row. It varies but the maximum a little bit of light, if at all. Displays rather details, like buttons with great patterns, the loop on the shoes, the lock of hair that curls toll on the plaid jacket.

It can and should sometimes the everyday things are shown. I realize that I read fewer blogs that by planning everything. I would have no great cookbook-like format in front of me, but the life of man. With all ‘the edges and optional extras. It must be a record full planning not always, it is also the motto of “little things”, “daily life”, “spots of my life”, occur and I think your readers are very grateful about such posts! … – For just these little things make a good blog, at least to my taste!

In the case of DSLR: automatic? More Shame as Hui. Yes, there are blogs, photographing everything with automatic and it looks good. Yes, I think that’s not good because of something I need to buy me any DSLR. Attempts times to photograph the AV or M mode and play with the help of the operating instructions with the settings. You can do so much and until it brings the functionality of your cameras out so right! Manual, GO GO!

Uses other camera formats: DSLR / digicam? Nice and good? Tried but other formats such as disposable cameras (waiting for the film is certainly worthwhile and exciting!), Or the cameras from Lomography (Fisheye? Actionsampler? Holga, Diana and Co? You will have so much fun experimenting!) And not Finally, the mobile phone – in times of smartphones, which have many, nothing is easier than to document his daily life. Since the large camera disturbs times and the phone is unsheathed faster. I LOVE to make it with the iphone photos, as you can get out as much from the photos through various apps (I recommend VSCO-cam, camera +, afterglow and photo toaster).

I hope that you have helped a little some of these tips. The next part there are expected in May (Camera Basics> as I photograph without automatic knobs?).

Anyone interested can also at the Photography Workshop of blognbuzz on 20/04. participate in Vienna. Cost point are € 150 / person, places are limited on 15th Included are all online materials and food. A DSLR would not be bad, but it is perhaps also give the opportunity to borrow a Nikon there. Marc Stickler and I will hold this workshop and I’m very excited about it, try out great stuff with you!